OLTRE COLLAGE #5: Sex Therapy (2020)
One of my collages from the FLORIALIA series, Thunbergia Alata 203, is featured on the cover of the new, fifth collage magazine of the Italian collective OLTRE: Sex Therapy. It can be ordered through their website.

The opening article, written by Harald Schole, was about my collage work.
kM is a professional magazine about artist materials and appears every three months. One can buy it in professional art supply stores in The Netherlands or take a subscription.

SERIES
Lebensfreude
Artist statement: “This is about how it is to be a woman, about sensuality, about to give life, to come from a mother who herself came from hers etc; so about where we came from, if we can believe Darwin we all came from te sea. The first animals in the world lived in the sea and some of these first animals can still be found there.”

A combination of images from old magazines about FKK (‘Freikörperkultur’) from Germany (fifties / sixties) with books about ‘lower life forms’. The texts in the collages add value to the works. This time the collages are ‘cut and scanned’ (not pasted). I have been experimenting with using both sides of the images / pages. The whole series has been on show at the exhibition Atelier Open Papier, March 2019 at the Bonte Zwaan, Amsterdam.

Resulted in a collage magazine, self published in a small one-time edition is out now!  Now €10 per item (was €15), postage costs not included. For sale at the Stedelijk Museum Shop. Can also be ordered through me: mjaquet@xs4all.nl

The Anatomy Lesson
Children wandering through pages of an old german anatomy book.

Madonna&Child
Maria and her baby Jesus, cut through and intertwined with plants. 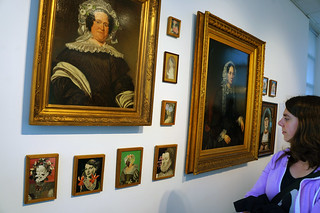 SPRiNG is in the AiR, April 21 – June 1, 2014, Outsider Art Kelder Amsterdam.
An international group exhibition curated by me, with some of my collages and video works.

HAUS AM SEE, December 14, 2013 until March 14, 2014. De Wijde Blik, Amsterdam.
A non stop installation with a slideshow of my collages. The series ‘Haus am See’ was inspired by  Peter Fox’ song.